A fascinating perspective, and some useful facts, about an issue facing every writer.

I had a fascinating conversation with Porter Anderson as part of The Booksellers #PorterMeets on Twitter on Monday. The topic was Hugh Howey’s AuthorEarnings project (after they released the original 7,000 report but before they released the 50,000 report) which has been raising hackles and causing ruckus in publishing the last few weeks. The conversation fired up loads of thoughts about self publishing and I wanted, following that discussion, to write a post that encapsulates the discussion and the reality of self publishing now.

The problem has been presented as an oppositional one, almost a battle between self publishing and traditional publishing. I think looking at it that way is useful in many ways but also obscures other issues too. Even so, in order to make sense of the current situation I’m going to explore self publishing from three perspectives in sequence, first authors, then publishers and finally readers.

Some time ago, I attended a talk entitled, “Armored Boy to Wise Old Man: How Men Grow Up . . . or Don’t.” A major point in the presentation was how males in different societies, definitely including ours, learn at an early age to cover themselves in armor, literally and figuratively. This armor offers protection from negative outside forces, but also prevents positive energies from being received and emotions from being let out. I realize this is somewhat of an oversimplification and generalization, but bear with me.

The speaker told about spending childhood time at a nearby museum that housed a large exhibit of medieval armor. I was reminded of my own childhood time time spent on school field trips to Fort Knox, a short distance from where I grew up in Louisville, Ky. The base not only houses the country’s Depository of (gold) Bullion, it is also home to the Patton Museum of Cavalry and Armor. Trips to the Museum were always a highlight of the week, if not the school year. While I am sure there were other exhibits in the Museum, possibly even suits of armor from the Middle Ages, what I remember best are the tanks. We could climb inside them, indulging male child fantasies. I had always played cowboys and Indians and even once been asked to leave a movie theater when I pulled my cap pistol from its holster and started shooting, attempting to help Hopalong Cassidy (one of my favorite childhood heroes) escape the bad guys. Tanks were so much better. They had more firepower and were armored for protection.

Societal armoring of children starts early, often in pre-school, when kids pester parents to buy costumes of their favorite superhero, or latest Disney princess. Like many other young boys, I remember tying a towel around my neck and running through the house pretending I was Superman and the towel my cape. I was invincible then.

As I got older, I lost the fantasy of operating a tank in the Army, or even being in the military. I did, however, fantasize about driving an earth-moving machine cross-country on the freeways, blade down. So, I was excited to see James Garner in the movie, Tank, as he actualized a variation on this fantasy. As I got older, I decided being in a war, or even just in the military and trained to kill, was nothing I wanted to experience. I continued to wear various suits of armor, however.

At some basic level, the outfits du jour we wore in middle school and high school were a form of armor. We wanted to fit in, to be like the others. Dressing according to the latest clothing trends became a sort of protective coloring, offering psychological and sociological protection. Wearing school colors, or clothes with the name of the school on them, were also a form of armoring. It was as if the force of the entire institution was protecting us. While there was some individuality on the Vanderbilt campus, where I attended college in the early 60’s, there was still an identifiable look on campus. The guys were chinos, button down collar, long-sleeve dress shirts (not white), Bass Weejuns (the original penny loafers) often without sox. Those of us from Kentucky wore lace up pebbly leather Bass Moccasins, which came in two colors – black and brown. I don’t know if the company sold these shoes elsewhere in the country. The only people I knew who wore them were fellow Kentuckians; we were recognized as such throughout the South by these shoes. I do know it was difficult finding a picture of them online; I was successful, however. 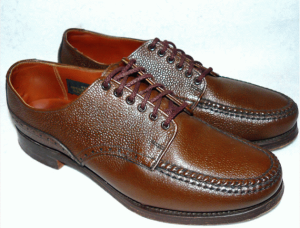 Coeds wore collared shirts with circle pins, skirts, white sox and loafers. They were not allowed to wear pants on campus, except on the coldest days of the winter. We were proud when people from other universities would recognize us by the clothes we wore. Our “armor” was a badge of pride. [sorry for the size and placement of the photo. I am struggling to learn how to use WordPress in an appropriate matter. If you can help, I would be grateful.]

As my life began to change after college graduation, so did the armor I wore. To find out how, you will have to read my next post.

So, we try this blogging thing again.  Hopefully, I will be more conscientious about posting and you, dear reader, will find something of value, or at least of amusement, here.

A little about me — I learned today while listening to Prairie Home Companion that I am the same age as Cheerios. Not sure how I feel about that except the cereal played a major role in my early childhood. We lived with my mother’s parents while my father was in service. My grandfather, a cobbler who emigrated from Russia and landed in Louisville, KY, and I would listen to The Lone Ranger on the radio, sponsored by Cheerios. Since time with my grandfather was a highlight of my life, cheerios became my favorite cereal and The Lone Ranger my favorite show before I was old enough to go to school.  Much later in life, I enjoyed watching Johnny Depp as Tonto in the recent movie, but it wasn’t the same as sitting in the living room with my grandfather. OK — that’s more info than you wanted.

I live on beautiful Whidbey Island, WA in Puget Sound, about 35 miles north of Seattle, with my wife, a retired award-winning journalist and writer. We share our space with an affection-demanding cat. I am an ex-lawyer, a retired higher education administrator and online instructor.  My days are spent doing volunteer non-profit work, writing, and seeking ways to avoid doing housework.  Mainly, I am focused on caregiving for my wife, who suffered a stroke about eight and a half years ago. She has made an amazing recovery, although not yet at her pre-stroke condition.  I have documented my journey as her caregiver, and the lessons I have learned on this path, in a memoir, presently titled Learning to Float: Lessons in Life and Love as a Spousal Caregiver. This blog will feature excerpts from the book, along with other mental meanderings, rants, raves, a few jokes – or at least what I think are funny vignettes, and whatever else comes to mind. I hope you enjoy it. Let me know.